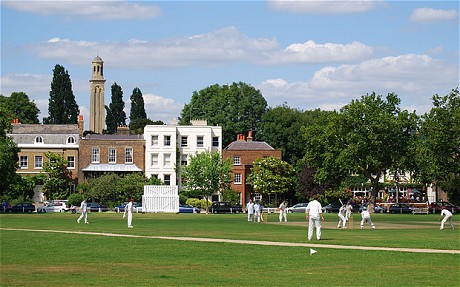 The 2014 Thames Valley champions eased to a regulation 77-run victory over Falkland.

But it wasn’t all plain sailing for the hosts as they found themselves in disarray at 4/3 after captain Will Shaw won the toss and elected to bat.

Younas (100) and skipper Shaw (23) began rebuilding with a stand of 45 before the latter was unluckily run-out as D.Kologula (3/20) flicked the ball onto the stumps at the non-striker’s end.

The Pakistani batsman was then joined by Guy Darwin (32), and the pair rescued the innings with a partnership of 124 - before falling within four runs of one another.

Youngster Sean Abbott (41) finished the innings with three lusty blows into the churchyard to lift the Cumbers to a respectable 239 off their 50 overs.

Kew also started badly with the ball as three dropped catches saw Falkland openers W.Langford and J.Bird get off to a flier with a stand of 44.

The wily left-arm spinner tweaked his way to a miserly 4/17 off his 10 overs as his quicker ball accounted for S.Rhys, F.Lennox, M.Abrams and P.Jenkins.

J.Williams struck an unbeaten 53 at just over a run-a-ball before Falkland were bowled out in the 34th over to give Kew another 25 points.

The hosts fell 22 runs short of the Duckworth-Lewis revised score as rain played its part at Kew Green.

Ed Taylor (2/45) got an early breakthrough as skipper S.Hayher nicked into the gloves of Lewis Abbott.

It was one-way traffic there on as S.Parsons (74) shared a 135-run partnership with former Hampshire and Somerset wicket-keeper Michael Bates (76) to run the hosts into the dirt.

Heavy rain fell during the tea break and once the players were able to resume the hosts required a revised 208 from just 29 overs.

The hosts found themselves tottering at 5/2 with a stunning catch from Bates behind the stumps accounting for form-man Younas.

And once captain Will Shaw was dismissed for a quick-fire 24, Kew were 33/3.

A rear-guard stand between Michael Outar (47) and Lewis Abbott (60), his first Division One fifty, had Kew ahead of the rate before being dismissed in quick succession.

C.Spence and Fisher finished with three wickets apiece as Kew’s innings petered out for their first loss of the season.

The first team got back to winning ways on Saturday as they edged out victory against Boyne Hill.

The Cumbers were able to defend 150 as they secured their third win of the new season.

Four wickets for Ash Baig, plus three for Guy Darwin and two for Kamran Younas wrapped up the points at Muddy Lane.

Captain Will Shaw won his fourth toss in a row and elected to bat.

The visitors ended the powerplay on 60/1 before losing five wickets for just 45 runs as J.Gaff picked up 3/28.

Sean Abbott extended his grasp on the six-hitting league with two blows over mid on as Kew scraped their way to 150.

Skipper Tom Mellor and Z.Mohamed steadied the ship with a stand of 30 before Baig claimed his first victim by trapping Mellor leg-before.

And seven runs later Baig had his second thanks to some sharp keeping by L.Abbott down the leg-side to stump D.Pike for a duck.

Andy Thorburn chipped in with a wicket of his own to leave the hosts 87/6.

Baig and Younas choked Boyne Hill into submission as they fell 50 runs short of their target – with Baig claiming figures of 4/10 off his nine overs.

On June 4th Kew Host Chesham CC for a top of the table clash on Kew Green followed by the first social of the season... come down to support the team!